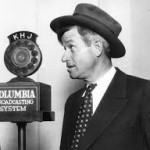 “A remark generally hurts in proportion to the truth.”

“Chaotic action is preferable to orderly inaction.”  Will Rogers

Will Rogers was an icon.  Born in 1879, Rogers was an American stage and motion picture actor, vaudeville performer, American cowboy, humorist, newspaper columnist, and social commentator from Oklahoma. Born in the Cherokee Nation, Indian Territory, Rogers was a Cherokee citizen.

I wonder how Rogers would react with today’s political animosity.  No question we’re facing a ton of issues.  Sadly, Rogers died in 1935 at age 56 in a plane crash.  A modern day humorist that compares to Rogers is Will Durst, a political satirist and comic I interviewed several years ago.  Durst was busy developing a new comedy routine on Baby Boomer-aging at the time… click on the link.

Next up for my Humor Project: I introduce you to Leigh Anne Jasheway, a humorist and comedienne from Eugene, Oregon.  Jasheway, a member of the National Association of Baby Boomer Women (NABBW) accidently fell into comedy.  I asked if I could join the NABBW.  Her response?  A flat no, “Unless you have surgery.  But don’t have surgery prior to figuring out who you are.  That would be a bummer….” 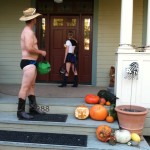 That’s my teaser.   Because it’s nearly Halloween and I need to gut a pumpkin.  If you find yourself biding time, waiting for the doorbell, take a look at “Dad’s Halloween Costume Scares the Neighborhood but the Kids are OK.”

Yep, that’s me in my speedos and cowboy boots costume.  The speedos fit a bit tighter these days…