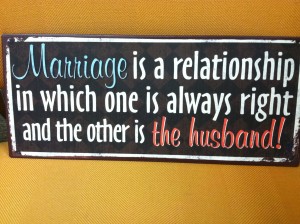 The human brain starts working the moment one’s born.  For guys, it stops the moment they speak to their mate.

Guys process information in the left hemisphere of the brain, or left brain.  We’re task oriented problem solvers.  I took a survey and discovered that my left brain dominates my right brain 65% to 35%, often to my demise.  Researchers conclude that women process equally well between the two hemispheres.  They are more creative and aware of feelings.  Women make up more than half the U.S. population.  Fellas, it’s a no-brainer.  We’re outnumbered and we’d better learn some right-brain exercises.

My wife can read my mind in real-time.  I also read her mind but it’s usually about a week later.  I feign comprehension.  The best problem solving skills still rarely help me decipher what’s happening.

I endured a particularly rough interrogation one summer day.  She wore her sunhat, work gloves, and attacked the yard.  Dirt covered her jeans and forehead.  Grime coated her sunglasses.  “Where’s my weed-eater?” she asked.  I hesitated, uh oh. 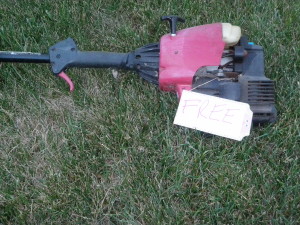 ,” I said.  “I took it apart, reassembled it, discovered extra parts, and gave up.”

“The question was… Where is my weed-eater?”

“It’s on the curb with a FREE sign.  Someone else can have the headache.  Use the back-up.”

She peered over the fence.  “It’s gone!  I told you, don’t mess with my stuff.  What was wrong?  Why didn’t you tell me? ” The questions shot out in rapid fire.

I had hoped her questions were rhetorical. I vaguely recalled conversations about her stuff versus my stuff, and the responsibilities of managing our collective stuff.  I rationalized and solved the problem.  The weed-eater was broken.  Expedient, and independent, decision-making became another problem.

“Congratulations, you just gave away your weed-eater.  The other one is now mine.  Maybe you’ll get one for Christmas.  Try your right-brain next time.”

What I thought was initially ours, was actually hers, but not decidedly ours.   Regarding the back-up weed-eater, which I thought was still ours, it’s now hers.

We live in a communal state and co-own our stuff except for several possessions.  The hockey equipment is mine, the blender is hers.  She’d argue that the blender is communal property because the entire household benefits.  It’s not just hers.  She’s welcome to wear my hockey gear but probably wouldn’t view the gesture as a fair trade.  My right-brain stormed.  I realized that apart from jewelry, nothing is really hers.

The holidays will save me though.  I’ll get another chance to sensitize and learn from Christmas past.  One Christmas, she coveted a “Snoopy dog” – a beagle – but settled on a rat terrier pup.  The pooch had a bald belly and freckles.  A drill sergeant has more hair.   The pup climbed in her lap.

“That mutt might need sunscreen someday,” I said.  “Or Rogaine.”

Did I really say that?  Later that day they both got even.  The puppy was hers but its dog-doo became mine.

One winter day, about six months after the weed-eater interrogation, I greeted my wife in the driveway.  I helped her unload a box.  It weighed about forty pounds and I guessed that it was electronic equipment.  I asked what it was.

“No, that’s OK.  You run short on paper and wreck the corners.”

“Shall I put it beneath the tree?”

Suspicion never entered my mind, but panic did.  It was two days before Christmas and I hadn’t started shopping.  My anxiety, and associated guilt, quickly elapsed because of the size of the box.  She got me a big present.  Big can be good.

I opened the box puzzled to find another wrapped container.  I thought this was the box-inside-another-box trick.  I wouldn’t fall for it but played along.  I eventually uncovered a kennel.

It moved.  I pressed my nose against the cage door.  Two eyes met mine.  I foc 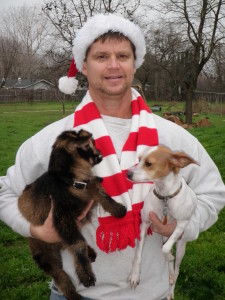 My wife grinned ear to ear, hemisphere to hemisphere.  “Merry Christmas to the man who thinks he has everything.  Enjoy the new weed-eater, it’s all…yours.”

### What did you get for Christmas?  Send me a note at eric@etcguy.com and tell me.  Merry Christmas.