Voter is Stuck in the Middle With…Who?

I love to go to Washington.  If only to be near my money.

Our family debates are more introspective than lively, more on her end than mine.  Maybe I’m just cynical.  But discussing the upcoming Presidential election with my voting age college daughter isn’t boring.  She leans further left than me, with her youthful, trusting, and idealistic viewpoint, but considering our choices I don’t want to vote for either candidate. The billionaire braggart, born more than halfway between third base and home plate, offends me.   I’m never impressed with people who are impressed with themselves.

On the other side of the aisle we have a professional politician who seemingly can’t understand the difference between an email server or a server at Starbucks.  I don’t trust her, whether it concerns national security or making a latte.  Clowns to the left of me, jokers to the right, here I am stuck in the middle with…who? 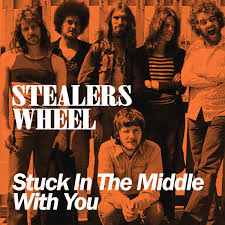 The conversation becomes more complex when it comes to gun laws.  I grew up in a Rocky Mountain state where gun ownership was as common as dog ownership.  We owned pistols and rifles but only used them for target shooting.

“Dad, why do we allow assault weapons to be sold?”

“I have no idea.  The same can be asked about armor piercing bullets.”

“I understand the 2nd Amendment but…”

“None of my hunting friends use ‘em.  I don’t think they’d see any sporting purpose in them.” 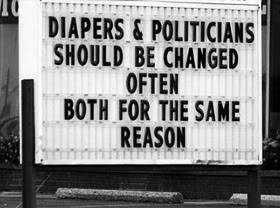 I wish I had solid answers for her.  None of this stuff appears in the parent manuals.  But this parent and his fellow parent baby-boomers sure haven’t helped out the younger generation.    We’re leaving our kids with huge social problems.  It’s time American voters aim a fire hose at Congress and flush out all incumbents, regardless of which side of the aisle they sit.  Like diapers, the multi-term self-serving politicians need to be changed… lest they stink up the place.

Voter is Stuck in the Middle With…Who?