William Penn Adair “Will” Rogers (1879 –1935) was a Cherokee cowboy, vaudeville performer, humorist, newspaper columnist, social commentator, and stage and motion picture actor. He earned fame as an American media star during the 1920s and 1930s.  Will Rogers tragically died in a plane crash in Point Barrow, Alaska in 1935.  A funny guy, Roger’s wit followed him to his gravestone.  He quipped during one interview, “When I die, my epitaph, or whatever you call those signs on gravestones, is going to read: I joked about every prominent man of my time, but I never met a man I didn’t like. I am so proud of that, I can hardly wait to die so it can be carved.”  And so it was. 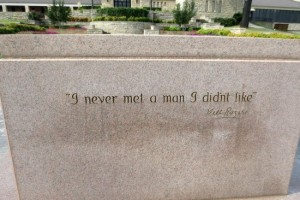 I’m registered as “decline to state” but have voted across the aisle for both Democrats and Republicans.  I’ll give any man or woman a shot at office if I believe they’re genuine and can do the job.  And if I like them I’ll vote for them again…but not for  more than two terms (unless the competition is weak or wacko).  Two terms in politics are plenty.  I disavow long-term politicos who succumb to group think and/or dogma.  Hire new blood.  A guy racing yaks has more appeal to me than a career politician.  At least the yak racer is moving. 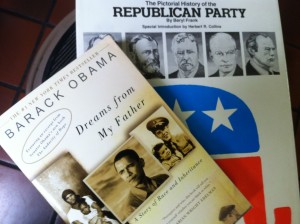 Our local library sells used books as part of its fundraising campaign and I found these two titles interesting: “The Pictorial History of the Republican Party,” and “Dreams from My Father,” by Barack Obama.  The selling price was half a buck each.  They remained on the rack for several weeks before finally vanishing.  Or maybe the library just gave them away.

I don’t care who people vote for and I’m reluctant to endorse candidates.  Vote for who you want.  All I hope is that people just keep wanting to vote.

Regarding politics, I borrow a quote from one of America’s most sensible men, Forrest Gump: “That’s all I have to say about that.”