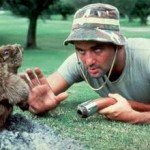 “You must know your enemy, and in this case my enemy is a varmint…”  Carl Spackler, aka Bill Murray, in Caddy Shack

A battle rages in my backyard.  Mounds of loose dirt and holes afflict our lawn.  The flowers and vegetables wilt.  The cause?  It’s a commune of Botta pocket gophers.  They’re the lowest of low, so low they stay under ground.  These merciless herbivores are resilient.  They gnaw and escape.  They eat our food and dig more tunnels than union laborers.  They work year-round.  I learned that one Christmas. 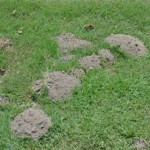 I sat in my patio chair, sipped coffee and reflected on the reason for the season.  A morning fog chilled the air.  Not a creature stirred.  All was calm, quiet and peaceful.  Then, it happened. 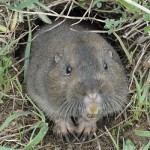 “Dad, there’s a live gopher in the house!” The cat brought it in.  All hell broke loose.

My meditation converted into chaos.  The dogs cornered the beast.  Hun, my wife, grabbed a broom and swept it into a bucket.   She handed it to me.  “Take care of it.”

I wasn’t in the mood.  I was feeling more holy, and forgiving, than usual.  “Aw, give him a break.   We’re celebrating the birth of Jesus.  It’s not in me to bash a gopher today.”

Don’t misunderstand.  My wife is not a heartless murderer and I’m not a wimp.  We both score points on the gopher tally as do our pets.  George, our tomcat, swaggers after a fresh kill, like a lion promenading across the Serengeti.  He eats most of the prey except for the liver.  I don’t like liver either. 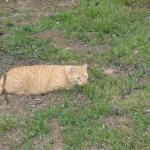 In the matter of Gopher versus Miller we’re at a stalemate.  We’ve tried countless eradication strategies.  Flooding only recharges our groundwater supply and racks up the water bill.  Inserting bottles in gopher tunnels just creates trip hazards.  Smoke bombs are inconsistent, but setting the ammunition is fun.  Poisons are too toxic, traps are too gory.

I considered the tactics of sixth-century BC Chinese general, Sun Tzu, who taught that armies should study their opponents.  So, I contacted central intelligence, the State Fish and Game’s website.

Pocket gophers do not hibernate, hence the Christmas surprise.  They burrow 10 feet underground and have a range of a half-mile.  They live in densities up to 20 per acre and migrate beneath roads.  Gophers do not respect fences or political boundaries.  My gopher problem is probably my neighbor’s problem too.  Adult gophers weigh 0.3 pounds and live three years.  Average litter size is six, and the rascals gestate in 19 days.  The sex ratio is 50:50 but varies seasonally.  Pocket gophers reach sexual maturity in the spring following their birth and, according to researchers, are polygamous.  I wonder how scientists figured that out.

State laws allow for the trapping and killing of gophers in any manner at any time.  I suggest that our consumer society has another alternative.

Let’s create a demand.  Let’s eat them.  These buck-toothed vegetarians eat our food so it’s a fair trade.

I searched the Joy of Cooking for a recipe.  No luck, however, I found recipes for opossum, porcupine and woodchucks, curious critters to eat.  I eventually discovered a recipe on Cooks.com for gopher stew that requires six lbs of gopher meat.  Just catch and butcher 20 gophers.  Add salt pork, onions, celery, peppers, tomatoes, potatoes, brown flour, and simmer the mix in your crockpot three hours.  Then enjoy a meal you’ll never forget.

If you mess up, blend it with something else to make sausage.  What can’t you grind into sausage?

My hunter friends can relate.  These are the same guys that mount deer heads and dead fish in their living rooms.  “Shot the deer in Oregon and caught the walleye in Nebraska,” they brag. 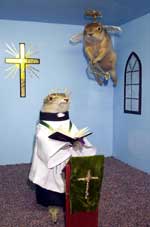 “What about the gopher up there?” I’d imagine asking. “Oh, him? He’s a former menu item at the neighborhood potluck.  His nickname is…Stew.”

Fellow Americans, let’s regain control of our backyards and gardens.  Martha Stewart beckons for the next great recipe.  Get outside.  There’s serious hunting to be done. 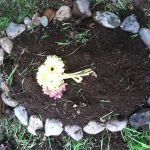 Author’s Note, December 2014:  Sadly, our family lost George “the tomcat” after he suffered an unexpected terrible illness.  He was a great friend and we miss him dearly.  We buried him in our yard, where he terrorized gophers.  We thought that was fitting.  George no longer purrs but his memory lives in print, and in our hearts.

25 thoughts on “Stewart the gopher loses the war”