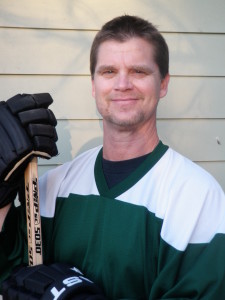 Seven percent isn’t bad.  It depends on your point of view.

Consider weight loss.  If I was seven percent lighter I’d weigh a svelte 162 pounds, not bad for a guy fending off love handles and sagging breasts.  Seven percent is a strong return on stocks given today’s, last year’s, or last week’s, economy.  A seven percent growth in my portfolio means I can retire ten years from now at 60, about seven percent younger than 65.

So, seven percent is good…unless it’s your h

ockey team’s winning percentage. We won one game and lost twelve this season, the best last place team in the league.  Percentage wise, we lost more games than the 1974 Washington Capitals.  They won ten percent of their games, going 8-67-5 in their inaugural NHL season.

I haven’t lost this many games since my bantam season.  Our Colorado Springs All-Star team went 2-24-2 that year.  We were hardly stars, but rather, star-struck by Denver teams loaded with talent. We were the Bad News Bears of our bantam league.  I wore jersey number 1, with white tape stuck on my back, to make a 7.   Our one competitive line lasted a period or two but that was it.  The second and third lines were scrawny guys that got munched by larger opponents.  Our season must have frustrated Coach Thiessen, who played for Denver University’s 1969 NCAA Championship team.  After our final game Coach awarded me the Best Defenseman trophy but it was a shallow personal victory.  He knew I played hard but it was less about commitment than 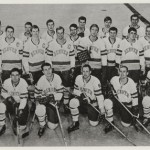 it was about skating for dear life. I was 14 and hated losing. But oh, how I loved the game.

Flash forward 36 years.  I now play in an adult in-line hockey league.  Sunday is hockey night, an evening of pushing, shoving, and gnashing of teeth.  But that goes away when I leave home for the rink.  The rink, a former warehouse, is a chapel for hockey players.  We confess our sins in the penalty box after skirmishes.

The in-line rules are different than ice. Each roster usually has 8 or 9 players and we skate four-on-four instead of five-on-five.  We lost our first seven games because we only had six players.  We’d sometimes beg, borrow and steal other guys who just finished the previous game.  Our losses were mostly one or two goal games.  We often played well but ran out of gas.   Twice we were blown out.  The referee skated to our bench during one of the massacres.

Our sole victory was by three goals.  I scored a hat trick, which not only surprised our opponents and my teammates, but me too.  We were hot that night and had a full roster.  Okay, so they had a barking Labrador in the net.  A win is a win. 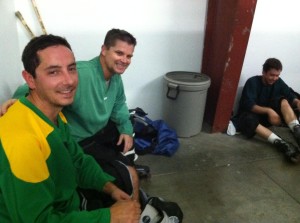 Every team in our league makes the playoffs, and we took our 1-10 record as the sixth seed in a double elimination tournament.  It reminded me of when my daughter’s soccer team, the Sparrows, made the playoffs with a 0-8 record.  No wonder they had a lousy record.  How do you cheer a sparrow?  The only things afraid of sparrows are bugs.  Ironically, the Sparrows got hammered by the Crickets but all players still received trophies.  I guess our politically correct society wants everyone to “feel good.”  That just doesn’t seem right.  It’s not real life.

The prize for our championship was more poignant than a trophy: a t-shirt, beers, and bragging rights.  For our first round game we came out flat and lost by four.  The loss discouraged us.  We thought we were peaking.

The second round game was a hard fought battle.  We hustled and passed well but lost 8-7.  Afterward, we shook hands with our opponents, the eventual champions.  They complimented our effort.

Compliments aside, losing at 50 sucks just as much now as it did when I was 14.  But I’ll keep playing.  Oh, how I love the game.

### Eric skates with the Hamilton City Hockey Club near Chico, CA.  Send him a note at eric@etcguy,com , LIKE and share this article, or join the Etc. Guy Facebook page.

17 thoughts on “Losing Sucks, No Matter How Old You Are”