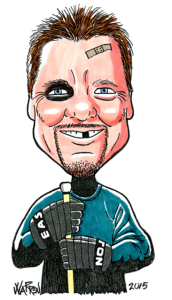 (Note: Names below were changed.)

We boarded the jet two hours late, me and 350 others.  No explanation was given other than lousy weather in Europe.  My original seat selection was along the back row aisle near the lavatory.  I’m one who plans ahead— the ten hour flight from Oakland to Stockholm would test my prostate, larger than a hockey puck, to the max.  Two minutes in the penalty box is rough enough.  No pre-flight drinks for me.

With the flight delay my seat assignment changed—I now had a window seat over the wing.   I nodded to a Swedish couple when I reached my row.  My companions for the next ten hours, Anna and Peter, stashed jackets and bags overhead.  They smiled and stepped aside.

Tanned and energetic, they chuckled as I belted in.  “We were gone two weeks,” said Peter, a bearded hulk who spoke in choppy English.  “Went to Cabo.  Caught a swordfish.”  He showed photos.

“Guess swordfish don’t live in the Artic,” I said.  “Did you see any sharks?”

“We mostly visited friends and family in San Jose,” Anna clarified.  “My son works there.”

Located in the South San Francisco Bay, San Jose is a technology hot bed within a wrist shot of Stanford, Oracle, and Apple.  I assumed Anna’s son was a computer geek.

“Sort of,” Anna beamed, “he programs goals for the San Jose Sharks.”

My brain scrolled down the Sharks’ roster.

“Melker Karlsson, a forward.” Anna smiled.  “He’s better at hockey than with computers.”

“Ja…yes,” Anna grinned, a bit embarrassed at her son’s celebrity.  “I haven’t seen him play in person since he got drafted.  I drove Melker and his teammates everywhere when they were kids.  I’d bundle up in long underwear, hats, boots, but still froze in the bleachers.”

Peter chimed in, “Sharks games come on TV at four in the morning.  Sweden is nine hours ahead of California.  Why visit Sweden…in January?  That’s not normal.”

Sweden is low on a January destination list for 99% of the world’s population.  Stockholm, in southern Sweden, averages five hours of daylight during January.   Further north where Anna lives the sun barely pokes above the horizon.  For this trip I was on a mission.

“I was born in Sweden and lived with a family during one of my high school years,” I said.  “I played junior hockey in Uppsala, for Almtuna.  A friend invited me to his birthday party in Stockholm.  So here I am.”

Anna explained that Melker often played up in divisions, competing against older players.  “It became harder for me to attend Melker’s games when he started playing internationally.”

I reflected on my parents’ commitment when I played youth hockey.  They sacrificed a zillion hours to support my brother and me.  Dad scheduled and coordinated tournaments.  But Mom probably logged more hours and miles chauffeuring players.

Mom washed uniforms, chaperoned sleepovers, and fed us a diet of Banquet Fried Chicken® and macaroni, in a time before today’s era of grass-fed beef and organic produce.  Teammates coveted our kitchen for its circular menu of fried chicken and macaroni.  We devoured pallets of the stuff.  Sometimes Mom rearranged the diet…to macaroni and fried chicken.  But she understood consistency, home economics, and the simple appetites of carb-loving adolescent carnivores.  Mom rooted for us no matter how badly we screwed up, even when we scored against our own goalie.  I wondered if Mom actually knew much about sports, let alone hockey, of if her vision failed.  At one of my Little League baseball games I played catcher to substitute for an injured teammate.  Our opponent stole home eight times.  When the game mercifully ended Mom shouted from the bleachers, “Yay catcher, way to go!”

I chatted with Anna about her hockey mom-ness.  She now skates in a women’s league with her daughter.  “It’s great fun,” she said.  Her eyes glistened.  “I’m happy to cheer for Melker but five thousand miles is a long trip. When Melker visits this summer I’ll have him buy me plane tickets.”  Anna winked, “He can afford to help out his mom.”

A lesson here is that hockey moms censor negativity.  Hockey moms only cheer.  When I was a squirt and skated within ten feet of the puck I’d panic and lose control of voluntary motor skills.  Mom seemingly never noticed.  Neuroscientists today would attribute my problem to undeveloped basal ganglia, a condition better known as jumpy puppy syndrome.   I’d spastically move the puck away.  At least I never fell backward and peed on myself.

But had that ever occurred I’m sure Mom would have been first to shout, “Yay, way to go!”

Eric Miller skates with the Hamilton City Hockey Club at the North Valley Hockey and Sports Complex near Chico, California.  One of the league’s “old guys,” he rarely scores.   Contact him by “liking” the Etc. Guy Facebook page.  Or send him a note at eric@etcguy.com.