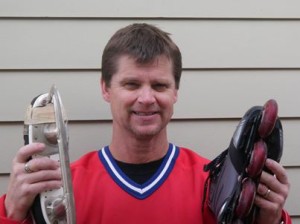 Humans are among the smelliest creatures in the animal kingdom.  We share the “Smelly Top Five” list with the wolverine, Tasmanian devil, polecat, and skunk.  Hockey players are a unique subgroup.  Though we are extremely agile, intelligent and handsome, we suffer a critical flaw.  Like whales and birds, we have a poor sense of smell.

“Get that bag out of the dining room,” Hun shrieked.  “It reeks worse than dried salmon!  Take it to the garage!”

“Really?  I can’t smell anything.” 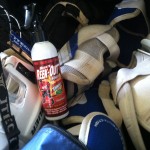 My beloved hockey bag, habitat to shin guards, elbow pads, gloves, pants, jersey, and the occasional mouse, is banished from the house.  It’s as unwelcome as a Persian cat on the sofa.  My wife can’t stand it.  Maybe I don’t smell it because of a genetic glitch.  I asked a buddy where he keeps his bag.

“It’s in the garage.  My wife won’t go near it…doesn’t bother me though.”

I suspected gender bias.  Surely a hockey mom would empathize.  So, I called one.

“I once stashed a can of Lysol® inside my son’s bag on a Canada trip.  The airport X-ray machine caught it and alerted a customs agent.  I cautioned her not to open it.  She nearly keeled over.  I thought we’d be quarantined.” 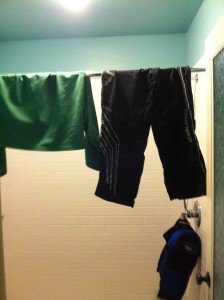 Hockey sweat, which contaminates said bag, is made up of salt, ammonia, and urea.  It flushes from said hockey player during games.  In addition to hockey bags, these organic compounds accumulate in places such as garden soil and leach fields.  With the exception of several fillings (teeth) and screws (knee), I’m completely organic.  I don’t understand my wife’s protest of a natural occurrence.

In simple English, hockey players seep into their equipment, with the seepage rate directly proportional to playing time.  Shin guards and elbow pads, which are stored in hockey bags, capture the seepage like sponges.  And then the bag sits alone and undisturbed, often in a garage or shed.  When bags are zipped shut, conditions propagate microbial zoos, with bacteriological activity heightening during the day.   The microbes are released when the bag is unzipped, which could be the next day or following week.  My teammates and I unzip our bags every Sunday evening, game night.

We lug our gear inside the locker room, sprawl out, and chitchat.  We complain about job woes and car trouble before delving into more serious matters like global warming.  After two minutes of that nonsense we focus on the game.   My teammates, though brainy, are absentminded.  They often forget to air out their hockey bags.

“Pretty good Swifty, but work’s a pain and my car needs a timing belt.  I also read that Iceland lost another glacier.  Hey, got any tape?”

“Hold on, it’s in my bag.”  Zzzziiiippp….Phwish….  Swifty’s bag shot a beam of noxious musk with dead accuracy into Johnson.

“Dude, that’s AWFUL, what crawled in there and died?”

“I don’t smell anything.”

“Maybe you should see a doctor.”

Swifty pouted while Johnson teased.  Johnson opened his bag, unleashing a cloudy vapor which floated past the nose of our goalie, Crazy Eddie.

“Holy cow, Johnson,” Crazy Eddie winced, “Is that blue cheese matted to your jersey?  That’s disgusting.  For Pete’s sake, use some Febreze® or hydrogen-peroxide.”

“Really?  I don’t smell anything.”

The insults continue as bags open.  By the time we tie our skates all eyes are watering.  We skate onto the rink, take practice shots on Crazy Eddie, and glare at our opponents.  I’d face-off against Schmitthauser who brushed by me during warm-ups.  We huddled for a pregame rap session.

“My god, Schmitthauser stinks like rotten eggs,” I said.  “What’s with that guy?” 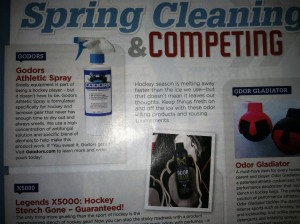 “Yeah,” said Swifty, “Schmitthauser never airs out his gear.  I heard that his wife has a restraining order against his bag.  He stores it in his Volkswagen.  Just don’t inhale at the face-off.”

With Schmitthauser we really need environmental protection.  That one guy pollutes more cubic feet of breathable atmosphere than a feedlot.  In comparison, my teammates smell like freshly baked bread.

Mother skunks won’t reject their young and I won’t snub my teammates, or their hockey bags.  They may smell worse than skunks but those guys run in my pack.  It’s a good thing we can’t smell ourselves.

But as for Schmitthauser… now that’s another matter.

PS Readers: If your wife, or gal, gives pause to your hockey bag, send her to Hockey Clean for helpful tips.  Cool site.

### Eric skates with the Hamilton City Hockey Club at the North Valley Hockey and Sports Complex near Chico, California.  Contact him at eric@etcguy.com, follow him on Facebook or Twitter, or buy his new book “Let Me Tell You a Story.”