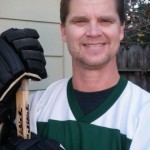 “Head-manning the puck means passing it down the ice…not at your own guy’s head.”–          Wayne Marshall, Colorado High School Coaches Association Hall of Fame

I never thought much about prayer before sporting events.  I do now but it isn’t to score and win.  It’s to implore divine intervention to keep my knees from blowing out.

To maintain a cool head before a big game is challenging, especially when playing rivals.  I reflect on our cross-town foe, Cheyenne Mountain High School.  They had bigger athletes and were league bullies.  Rumor was that their players started shaving in seventh grade.  Some of their seniors had gray hair, mortgages, and investment portfolios.

Cheyenne Mountain skated four lines compared to our three.  Our third line was camouflage.  We wanted opponents to think we had more players than we really did.

Coach Marshall epitomized the hockey coach persona.  He rarely became excited and was not a touchy feely guy. He disdained Cheyenne Mountain like the rest of us.  He wore a jacket and ties to games, chewed his cigarettes, and spoke in choppy sentences that we could understand.   A competitive softball player, Coach brought his sports bag one day and removed a catcher’s mitt.  “Pass it around,” he grumbled, as he gave it to Bowman.  “Take a bite.”  One pregame speech went something like this. 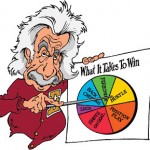 “Forwards:  Spread out, create opportunities, pass the puck.  Forecheck. Backcheck.”  Bowman bit a mouthful of leather and handed the mitt to Gerstung.

“Defense: Guard the blue line, shoot low.  Protect the goalie like your kid sister.  The net is YOUR territory.  No stupid penalties.”  Coach forgave penalties like a traffic cop pardoned speeders.   Penalty box visits meant doom at the next practice.

Coach hesitated and watched Gerstung slurp a rawhide lace like a spaghetti noodle.  Gerstung relayed the mitt to Hurley, who bit off a chunk and handed it to Watt.  Watt grew up on a cattle ranch and ate living animals.  Coach continued.  His intensity rose.

“Third line: Wipe off the camouflage face paint.  Pause.  Who scotch-taped Donovan’s blades?  Boys, this is not the time to horse around.”

Coach revved up.  By now he had chewed a pack of cigarettes and his tie unraveled.  Energy buzzed from the locker room.  We smacked shoulder pads and helmet-butted, warriors preparing for battle.  Hurley started eating the carpet.  Our testosterone level reached 10 on a 5 scale.  Then Coach switched gears. 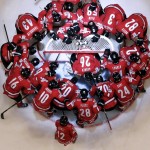 Only Coach knew it:  “Our Father who art in heaven, hallowed be thy name.  Thy kingdom come, thy will be done, on earth as it is in heaven.  Give us this day our daily bread, and forgive us our trespasses, as we forgive those who trespass against us.  And lead us not into temptation, but deliver us from evil.  For thine is the kingdom, and the power and the glory, forever and ever, amen.”

But we said it this way:  “Our Father who art in heaven, hollow be your name.  Thy kingdom come, thy will be done on earth and in heaven.  Give us Wonder Bread ® today. Forgive trespassing and trespassers…cough…mumble…hiccup.  Keep us out of the penalty box…  For yours is the kingdom for which it stands, one nation under God, indivisible, with liberty and justice for all.  Amen.”

We broke the huddle and stormed out.  “Let’s kill those guys!”

So much for turning the other cheek.

We beat Cheyenne Mountain once in four tries.  The games were hard-fought battles.  We hustled, played smart, and left everything on the ice.  Coach was disappointed to lose but never chastised us for trying our best.

I wish we had beaten them my senior year.  I recall the sweaty stench in the locker room after losing.    We sat dejected, realizing an opportunity was missed.  If we had a few more shots, one more shift, or said the Lord’s Prayer right, we might’ve won.

Those memories are over 30 years old.  I’ve since forgiven Cheyenne Mountain for trespassing across our goal line.  But I sure wish we won.

39 thoughts on “Coach and players motivate before a big game”