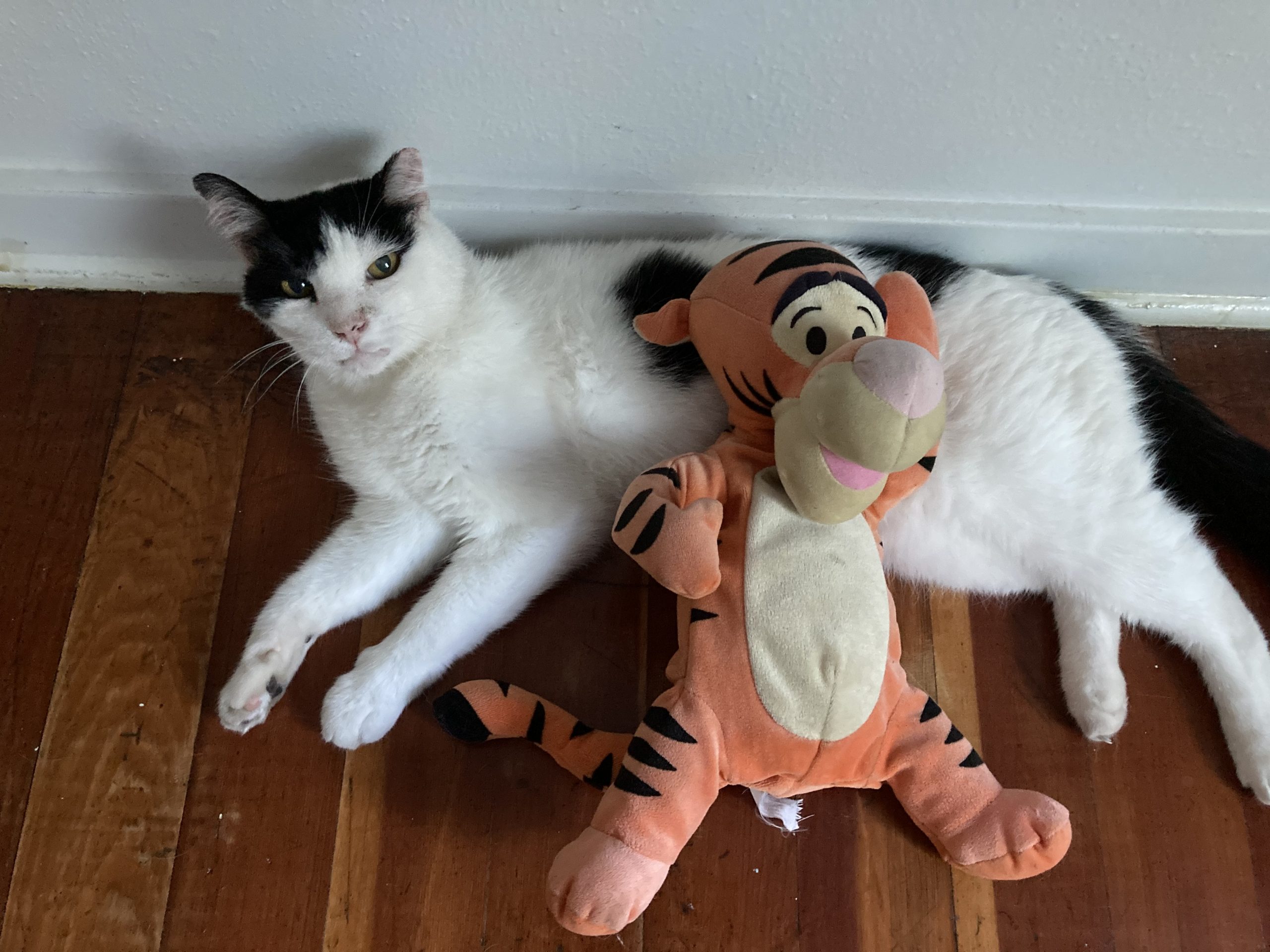 He went down swinging.

I grew up a pet lover.  I’ve owned cats, dogs, chickens, goats, and parakeets… critters with fur, feathers, teeth, beaks, horns, hooves, paws and claws.  Some of my animals I remember better than others.  Radio, a sweet Labrador Retriever named by my daughters, was one.

I got Velcro in November 2005 at a kid’s birthday party, a party favor if you will.  I doubt the kid actually had a birthday—it was a fabricated ploy to handout kittens. A sucker for kittens, one feisty tomcat caught my eye. He stood up in his pen, meowed, and picked me.  The little guy sported a white coat with black spots.  I figured he’d make a perfect playmate for our puppy, Radio.

The kitten was named after I brought him home.  I sat cross-legged on the couch reading the newspaper when I felt claws tear into me.  The kitten climbed onto my lap and peered beneath the sports pages.  The youngster hadn’t learned the art of claw retraction and stuck to me like velcro.  And so he was named.

Velcro grew up in Radio’s mouth, a living chew toy. The two ran, chased one another, and sparred.  Radio never harmed Velcro nor did Velcro scratch the dog—they were mates.   Velcro socialized to puppy slobber and took on canine behavior.  Velcro came whenever I called him, followed wherever I walked, and enjoyed boxing sessions.  By day he roamed the backyard hunting for voles, moles and mice.  The yard was his domain, his Serengeti, a place that required population control.  He gifted me dead rodents and I’d praise him.  He hunted all night but as he aged he preferred hanging out with me.  He greeted me after work, swatting my boots as I walked past.  “Where’ve ya been?” he’d scowl.  The animal communicated through his eyes, gazing into mine, a strange telepathy as if saying, “I got skunked today.  Feed me.  But not dry food.  I want chicken and ice cream.  Then I’ll sleep on your head.”

Velcro did not easily intimidate.  He stood his ground like a sentry, stalwart but indifferent.  A buddy brought his three-year old Labrador, Rainy, for a visit.  Rainy is the consummate hunting dog, a fetcher, swimmer, well trained and disciplined.  But around Velcro, Rainy took a wide berth.  On their first visit Velcro swiped Rainy’s hindquarters.  The dog yelped and jumped higher than a tailgate.  Over time the two animals got along, each respecting the other.

For the past year, a difficult period for me, Velcro was a loyal friend.

Just after New Year’s I took Velco for a rabies shot and physical exam.  “How’d he do?” I asked the vet.  “We wore welder’s gloves.  Your cat is fine but my technician needs Band-Aids® and counseling.”  I forgot to disclose that Velcro had a temper.

Right around Valentine’s Day I noticed changes.  Velcro’s health appeared to wilt.  He measured each step, nearly stumbling over leaves, and no longer jumped on my lap.  He had neither thirst nor hunger, not even for ice cream.  Velcro’s litter box remained unused for several days.  He stammered like a punch drunken fighter knocked onto the canvass.  It was like Velcro had a cat-stroke.

I struggled with the decision to put Velcro down, hoping he’d recover, but each day his condition worsened.  Velcro whimpered when I petted him and he struggled to walk.  His eyes locked on mine as if to say, “I’ve had a great ride.  But I’m done.”

I drove to the vet on a Sunday afternoon.  The kids arrived for moral support.  I coordinated paperwork with the vet who then sedated Velcro.  But before administering the final shot the vet allowed us to spend private time with our friend.  Velcro lay limp in my lap.  We knew euthanasia was the humane act.  My youngest daughter leaned into me, “When you get a pet they’re a guaranteed heartbreak years later.  But we do it anyway.”   The vet returned to the waiting room and after a brief pause administered the last shot.  In seconds Velcro was gone.

Velcro lived over 15 years, outliving our dog Radio by five years.  My kids grew up with Velcro from kindergarten to college.  Velcro’s life covered more than half my kids’ lives and a quarter of mine.

Thanks for the memories old friend.  And thanks for picking me.  We had a great ride.

2 thoughts on “Cat’s Life Was a Great Ride”